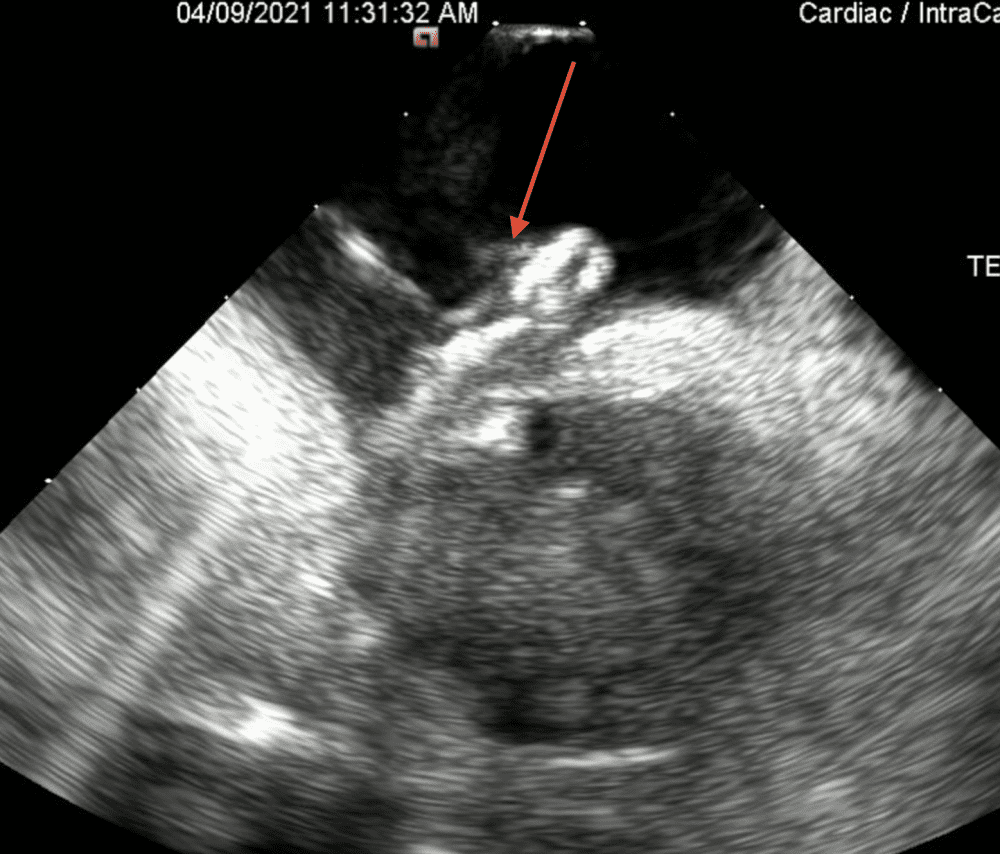 Was my mini stroke (Transient Ischemic Attack) associated with the hole (Patent Foramen Ovale) in the heart?

On Friday I took care of a 34-years young Caucasian male patient who had suffered transient ischemic attack about 2 years ago and had not even realized the significance and consequences of that.  This young man had a complicated history of motor vehicle accident followed by back injury and chronic back pain for 5 years.  He had undergone spine procedures with some fusion of the intervertebral disc space.  After this surgery about 4 to 6 weeks later one morning, he suddenly lost movement of his left arm and hand muscles. He also had facial droop on the same day which lasted for about 24 hours.  The left upper limb weakness improved within 2 hours. He thought it was related to his spine issue, did not realize that he had suffered transient ischemic attack (mini stroke) and did not see a medical doctor.

Recently with another episode of similar ipsilateral weakness, fortunately this time around, he ended up in the hospital.  In a young patient who has no other traditional risk factors for stroke it made obvious sense for us to evaluate him for presence of patent foreman ovale (PFO).

What is stroke (CVA) or mini-stroke (TIA)?

The cerebrovascular accident or CVA is defined as having permanent loss of either motor or sensory nerve activity on part of the body.  When this motor or sensory nerve activity loss is less than 24 hours it is defined as transient ischemic attack (TIA) or mini-stroke. Stroke is the fifth most common cause of death and leading cause of preventable adult disability in United States.  World-wide about 12% of total deaths happened because of stroke in the range of 7-8 million incidents per year. For anyone getting permanently disabled with loss of motor or sensory activity, aphasia or inability to speak, inability to ambulate, could be the worst nightmare.

What are the most common causes for CVA/ TIA?

When a stroke cannot be attributed to either blockage of major or small brain artery or cannot be attributed to a blood clot into the brain artery from the heart (Lack of Atrial Fibrillation or LV Dysfunction)  it is considered a cryptogenic stroke.  Approximately one third of all ischemic stroke are considered cryptogenic stroke.  About 40% of the patients with suffered ischemic stroke without an identifiable will cause has a patent foreman ovale.

Although in the past the relationship between the patent foramen ovale and the stroke was quite controversial more recent evidence from 3 major clinical trial has provided more clear evidence that cryptogenic stroke is more likely caused by patent foreman ovale.

What is Patent Foramen Ovale?

Foramen ovale is a gap in the wall between the 2 upper chambers of the heart (inter-atrial septum).  This Is crucial for a fetal survival while in intra uterine life stage.  As soon as we are born out of mother's womb and we take breath, this gap between the two layers of the inter-atrial septum, septum primum and septum secundum, which were overlapping gets fused.  This process completes the closing of Foramen Ovale in 3 out of 4 people.  About 1 out of 4 people live through their entire adult life without having fusion of these 2 layers of the interatrial septum.  Everyone who has patent foramen ovale through the adulthood does not necessarily suffer stroke. Some of these patients with patent foreman ovale has associated feature called interatrial septal aneurysm. These patients are at high risk of developing paradoxical embolus or a stroke associated with patent foreman ovale, as a small clot or debris crosses from the right side of the heart to the left side of the heart and causes stroke. This gap between the two-upper chamber of the heart did not exist, the small clot or debris can end up in one of the billions of lung capillary and would not have any ill effect to the patient. Even a 0.2 mm size clot if crosses to the left side can go to brain and can cause a stroke with permanent damage.

How is the patent foramen ovale diagnosed?

The most important step is the clinical awareness and clinical suspicion. Although in the past it was controversial now there is significant evidence to suggest that diagnosing PFO and correcting it reduces the reoccurrence of stroke or TIA.

Sonography of the heart, also known as transthoracic echocardiogram is the first step. While performing the echocardiogram of the heart through the venous access agitated saline is injected. Patient is asked to perform Valsalva maneuver. When the bubbles are seen crossing from right upper chamber of the heart to the left upper chamber of the heart we can confirm the diagnosis of patent foreman ovale. The interatrial septum moves 10 mm or more with heart contraction, it is considered aneurysmal septum. The next step in the evaluation is a transesophageal echocardiography. This is performed with the patient sedated into a twilight zone and the tube about a thumb size is inserted from the mouth into the food pipe. We can confirm the diagnosis of patent foreman ovale and its complexity with this test. We can evaluate the length of the tunnel between the 2 layers of the interatrial septum, we can also size the thickness of the septum secundum. These are important parameters in deciding how to treat his patent foreman ovale.

How can we confirm that the patient's stroke is more likely to occur because of patent foreman ovale and not from one of the other causes?

Dimensions use a tool called risk of paradoxical embolism (RoPE) score. Higher the score more likely is that the patient's stroke was caused by the PFO and paradoxical embolism. For each of the clinical conditions as high blood pressure, diabetes, smoking 1 score is given for positive history. If patient had an embolic stroke on the imaging then the patient is given 1 extra score. Patient studied in the clinical trials were up to age 69.

How is the patent foreman ovale treated?

The procedure to close the hole (PFO) has involved into a truly minimally invasive patient friendly very safe procedure over his last 15 years. After almost 8 to 10 years of controversial results from different studies just about 3 years ago there were 3 large studies published in the same issue of New England Journal of Medicine suggested that by closing the patent foramen ovale in patients with age less than 65 years we can successfully reduce the risk of recurrence of stroke or TIA. Patients were carefully selected and were not treated with PFO closure if they had any of the traditional risk factor such as atrial fibrillation or LV systolic dysfunction.

I perform these procedures with mild sedation only. This is a truly minimally invasive and same-day procedure. Generally speaking I send the patient home within 8 hours of procedure. The procedure is performed via bilateral groin vein access. One of the vein access on the right groin generally used to advance the device that helps close the PFO or in a layman language it is a “plug” or an “umbrella” device, that I advance from the right groin venous access to plug the hole. From the left groin vein access I advanced the tube that allows me to do sonography or echocardiography of the heart from inside the heart. This helps me navigate my equipment, help me across the hole in the heart or PFO, park my wire in appropriate location and avoid any trauma to the heart. This images also help me size the device. There are two FDA approved device for this procedure. Amplatzer PFO occluder and CardioSEAL Gore PFO occluder. I use either of the 2 device based on the patient clinical condition. Over the years the device have become very predictable, high success rate, very low risk of complications.

As always, I say nothing in medical science is risk free. As physicians our most important goal should be “DO NO HARM”. Anything and everything that we offer as treatment to a patient, starting from a aspirin to an open-heart surgery, each come with the calculated risk and benefit. We always have to individualized the patient's clinical condition, and offer treatment only if it is either going to make the patient live longer or live better. In a patient suffered from a CVA or TIA associated with PFO, the risk of recurrence including disabling stroke is very high. On the other side the risk of procedure and the risk of side effects of the procedure is low. Given the situation of having high likelihood of benefit versus the low risk of the procedure there is a large therapeutic window and patient should be offered this treatment.

This goes without saying that in such procedures experience matters a lot. I have performed over 300 procedures to close the hole in the interatrial septum either in form of patent foreman ovale or interatrial septal defect. I can clearly determine the difference in my skill level, confidence level and procedure outcome now, in comparison to when I started, is drastically different.

In conclusion, if you or a loved one ever suffered neurological symptoms where you had a transient or permanent loss of motor or sensory activity or had transient visual loss, or had deficiency of any cranial nerve, you must consult your physician to get to the root cause or the diagnosis and use appropriate resources to reduce risk of recurrent stroke.

Kintur Sanghvi MD FACC FSCAI Dr. Kintur Sanghvi has been intensely focused in learning, researching and teaching cardiovascular medicine since age 23. After practicing in a legendary academic teaching hospital for 11 years in NJ, acquiring experience of over 10,000 cardiovascular procedures; publishing multiple research articles, book chapters, and training over 100 cardiologist, he has decided to open NJ Heart & Vascular Care to provide: A personalized, compassionate and comprehensive care in all the areas of Cardiology, Interventional cardiology and Endovascular Medicine. He has been internationally acclaimed and has given talks as guest faculty in multiple countries across 5 continents. . With deep interest in problems solving, he has innovated and published multiple new procedures, techniques, and device solution and owns multiple patents. The Practice’s motto is: It is truly a privilege to provide cutting edge, evidence-based care to each patient, one at a time. 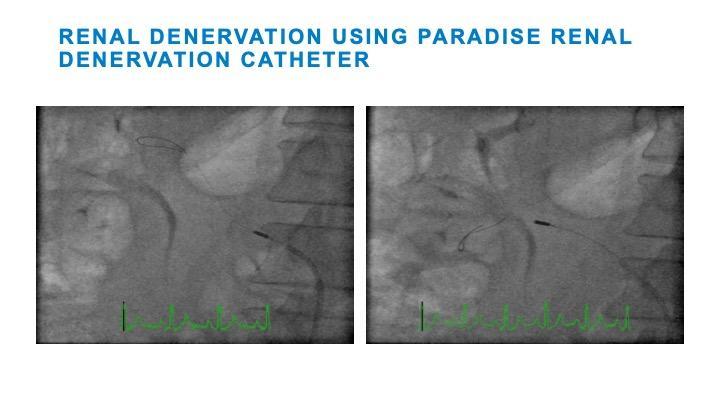 I am the second author of a clinical trial report published in The Lancet, highest rated medical journal. Our research showed that Ultrasound Renal Denervation lowers the blood pressure significantly more than the multiple medications combination.